For a good reason

The company was faced with the problem of securing and restoring Virtual Machines at the beginning of its operations. However, this request turned out to be a very complicated process, should be dispensed with the use of tools of the then common third party. These were not only expensive, but also difficult to use and configure. If problems occurred, Altaro’s staff did not receive the support that would have effectively helped them.

Altaro came to the conclusion that it could develop a better backup solution – and they  consistently implemented project. Altaro VM Backup quickly became backup and recovery solution for Hyper-V and VM merchandise that is used today by a large number of enterprises of all sizes. For us, as an IT service provider, the choice of this partner was therefore not difficult, especially since the ongoing implementation, operating and support experiences clearly speak for this provider.

One of the biggest benefits of Altaro Backup software is its fast operational readiness: the program is easy to install, allowing you to make a backup of your virtual machine in less then 15 minutes. Neither complex configurations are necessary nor do you have to consider software dependencies. This shows the practical relevance of the developers, who promise and deliver a certain performance – without this causing problems or a high learning effort needed. 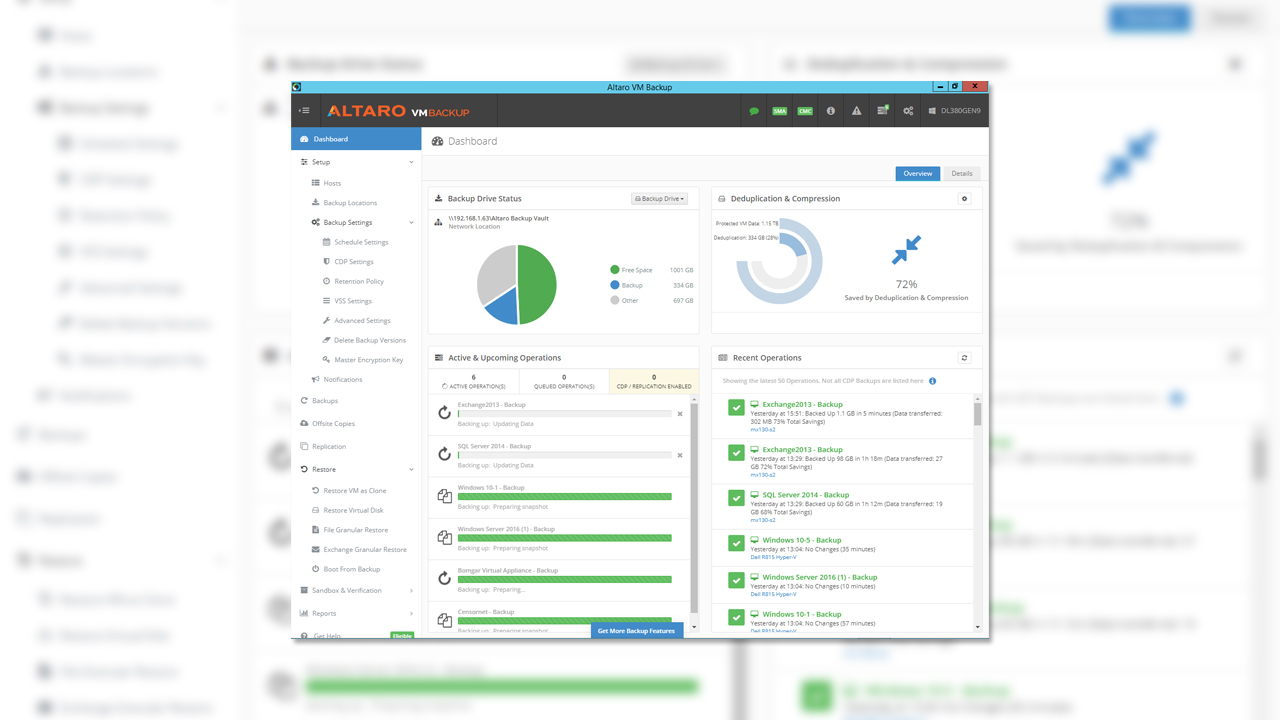 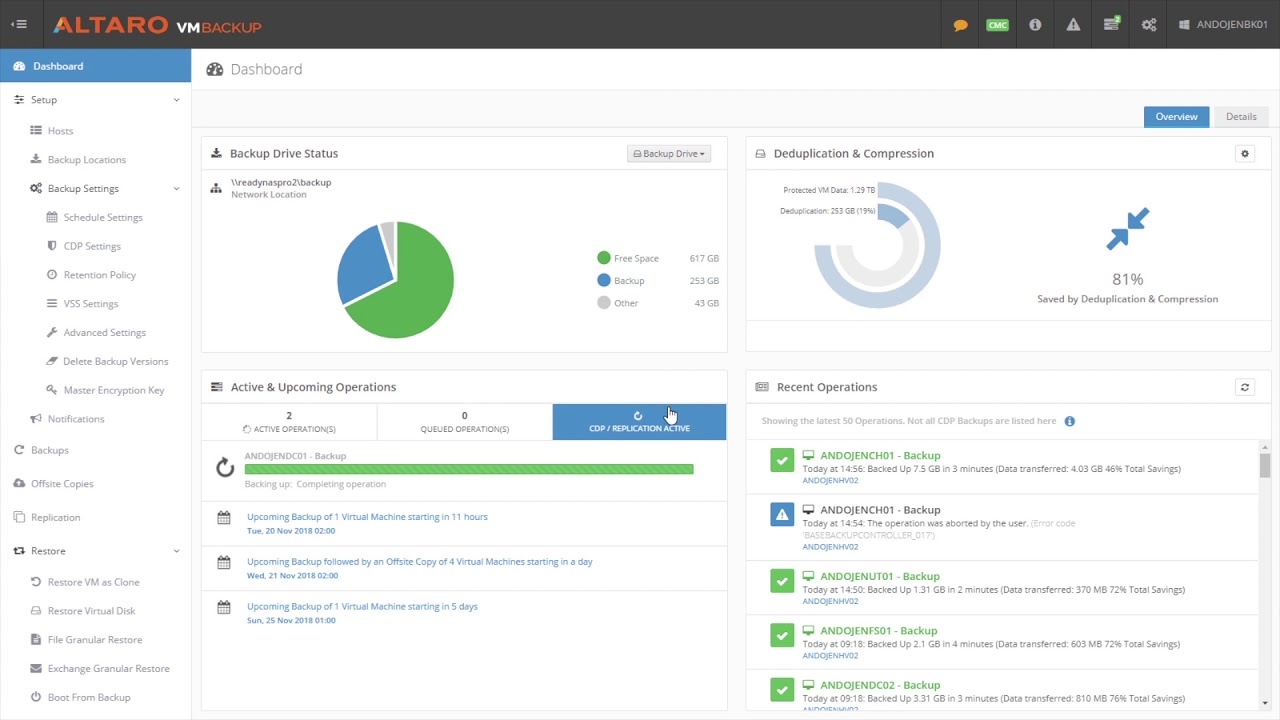 Configuration of the backup software made easy

The Altaro user interface is intuitive and easy to use, making it easy to implement a reliable backup strategy. At the same time, backup and restore jobs can be configured as needed and managed effectively – even across multiple hosts. It gives you not only full control, but also real scalability: The monitoring and administration of all your Hyper-V and VM-Ware hosts is handled smoothly via a console.

For ease of managing and configuring backup jobs, powerful features are available, such as offsite backup replication with WAN acceleration, as well as options for recovering files and Exchange items to the smallest detail or the automatic verification of the backups and much more.

Most importantly, you can implement Continuous Data Protection (CDP): just have the backup done every five minutes to make sure that even in a volatile situation, only data that is produced in that short period of time will be lost. They thus optimize the recovery point objectives (RPO) to a considerable extent.

You can stay flexible without sacrificing complexity: simply select a virtual machine and drag it to your preferred backup schedules and retention policies. How to implement your own individual strategies. Access is via the unique Cloud Management Console, which allows you to keep track of and manage all Altaro Backup installations. 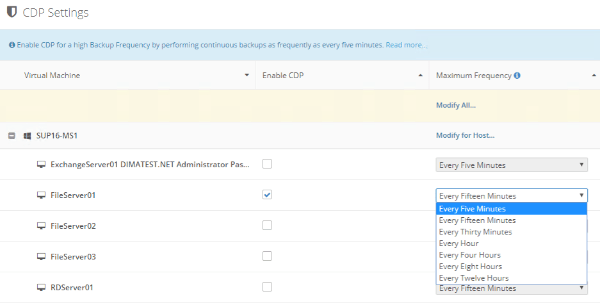 The Altaro promise: Best support ever

Problems can not be avoided – regardless of the quality of the environment. It is all the more important that you get competent help quickly. Altaro gives the promise to ensure effective support and stands by it. Calls are guaranteed to be accepted by the support team in less than 30 seconds. A special team of experts for Hyper-V and VM goods is available for inquiries.

The following routes are available:

Here, too, Altaro goes his own way, because you are talking to a real person and get in touch with a product expert – they do not get an automatic answer, nor do you have to deal with a gatekeeper.

Altaro scores with the best deduplication

Another highlight of the Altaro VM backup solution is advanced inline deduplication, which dramatically reduces the storage footprint of your entire backup repository. This is where Altaro sets itself apart from its competitors, and it is no coincidence that this solution is referred to as the best duplication of the entire industry: the smallest backups can be realized.

Your advantage: Since deduplication is carried out comprehensively for all backup jobs, it is not necessary to create VM groups and thus postprocessing. But with less storage space for your backups, users also benefit from faster backup and restore speeds. The reason is obvious: less data has to be transferred. The effect naturally increases with each additional Altaro backup.

The special feature: This extended inline deduplication does not cost you anything in terms of server performance. Not only are the smallest backups created, but Altaro also uses variable block sizes to ensure optimal efficiency. But you also have the option of archiving different backup variants in addition to the continuous backups: simply set up separate backup cycles and save the backup versions created on a weekly, monthly and yearly basis as required.

In summary, the Altaro solution scores with an interesting portfolio of enterprise functionalities. In addition to inline deduplication and replication, this is especially the ability to store backups in the cloud or at remote sites. Scope of service is more rounded off with the granular recovery variants, such as Exchange emails, single files or VMs, the special Boot from Backup feature, and several other features.

Altaro specializes in the use of backup software in small and medium businesses – and has so far convinced thousands around the world. With the free version, which will be available for a limited time, and above all with the qualified support team, Altaro sets its own standards. From our point of view, however, it is the numerous positive experiences that many different customers have been able to make in difficult situations that clearly speak in favor of this backup software and the company behind it.

You have technical questions?

Take a look at our documentation or contact our excellent team.

© 2022 we-IT® GmbH | we-IT® LLC | we-IT® DOO Alle Rechte vorbehalten | All rights reserved | Sva prava zadržana | Tous les droits sont réservés
We use cookies to give you the best user experience. If you continue to use this site, we assume that you agreeOkDecline